Modern mobile devices allow a rich set of multi-finger interactions that combine modes into a single fluid act, for example, one finger for panning blending into a two-finger pinch gesture for zooming. Such gestures require the use of both hands: one holding the device while the other is interacting. While on the go, however, only one hand may be available to both hold the device and interact with it. This mostly limits interaction to a single-touch (i.e., the thumb), forcing users to switch between input modes explicitly. In this paper, we contribute the “Fat Thumb interaction technique”, which uses the thumb’s “contact size” as a form of simulated pressure. This adds a degree of freedom, which can be used, for example, to integrate panning and zooming into a single interaction. Contact size determines the mode (i.e., panning with a small size, zooming with a large one), while thumb movement performs the selected mode. We discuss nuances of the Fat Thumb based on the thumb’s limited operational range and motor skills when that hand holds the device. We compared Fat Thumb to three alternative techniques, where people had to pan and zoom to a predefined region on a map. Participants performed fastest with the least strokes using Fat Thumb. 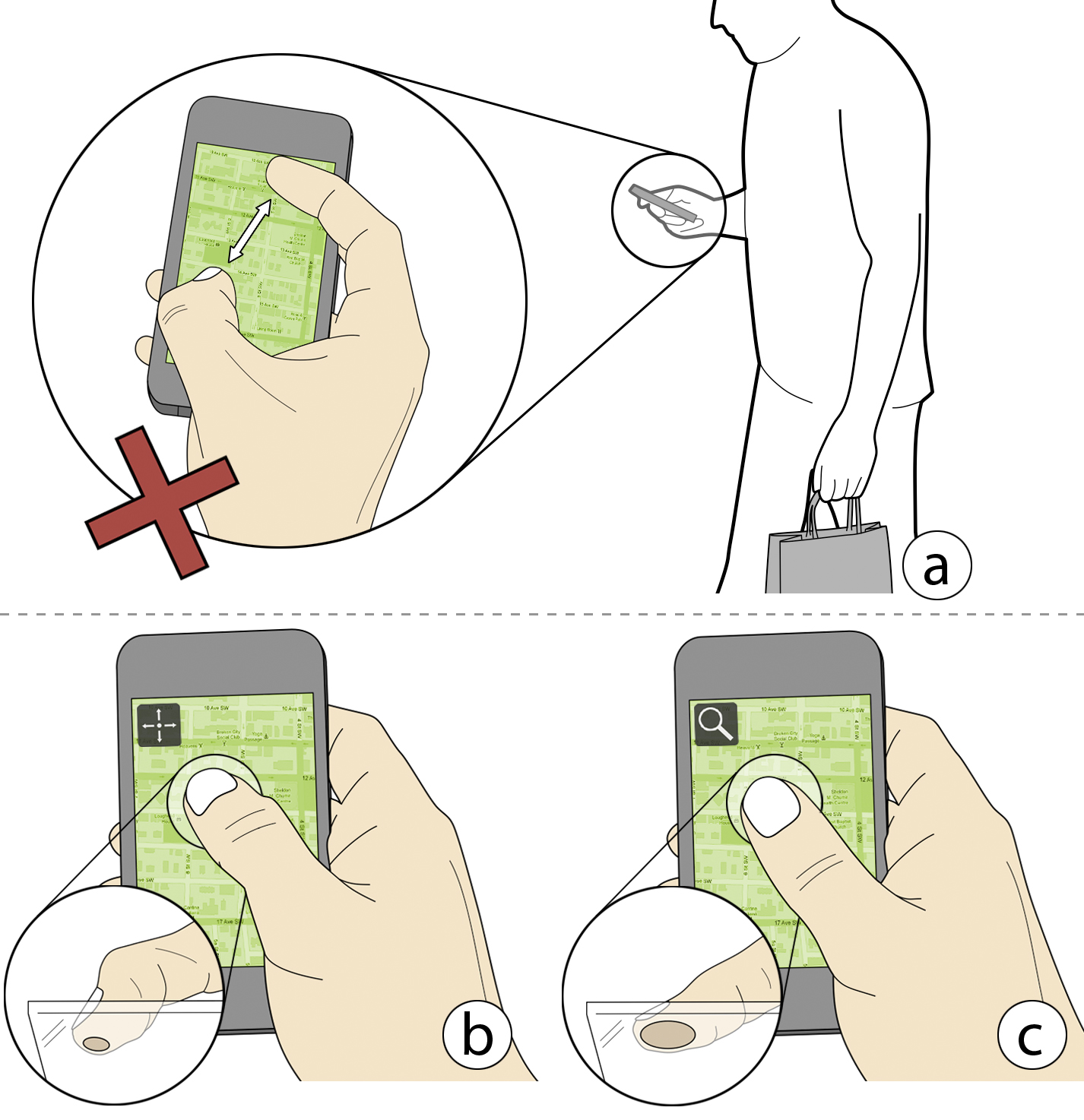 Performing multi-touch actions on a device with just one hand requires awkward hand postures (a); the Fat Thumb technique allows fluent single-handed mobile interaction; for example, panning (b) and zooming © a map.

Many mobile devices are equipped with multi-touch screens allowing for different content manipulations by using multiple fingers. For example, users can interact with a map by varying the number of touch points (i.e., panning with one finger, zooming with two), rather than by selecting dedicated controls (e.g., menus, buttons) to switch between modes. This is especially important for mobile devices, as it reduces the number of controls cluttering the small display.

Yet multi-touch gestures on mobile devices require both hands: one to hold the device, and the other to perform the gestures. This can be problematic, as there are many situations – such as when a person is carrying a bag – when only one hand is available to both hold and interact with the device. Multi-touch actions during such one-handed use become awkward. The figure above illustrates such a scenario, where we see how performing the thumb/index finger pinch gesture while holding the device in the same hand requires awkward hand postures. This leads to less precision, more fatigue, and insecure grip of the device. Alternately, users may perform a sequence of single touch strategies to achieve the same result. However, this usually involves an input mode switch between actions: selecting modes via buttons and menus, or single-touch gestures recognized as mode-switches.

To mitigate this problem, we contribute Fat Thumb: a method for one-handed input on a mobile device that caters to the thumb’s limited operational range. It uses the thumb’s contact size, where changing the thumb’s pitch fluidly allows for transitioning between different modes of interaction. The thumb’s movement then performs the selected mode. We illustrate and evaluate this technique in a pan-and-zoom task in comparison to exiting single-handed techniques (i.e., a slider, Rubbing, and CycloStar). Our findings demonstrate that users were fastest using the Fat Thumb technique, and overwhelmingly preferred it to existing techniques for one-handed pan-and-zoom.